The challenge: How can executives and senior leaders reduce their current workloads and invest more time in generating innovation and creating greater value for customers? Insigniam consultants shadowed 15 leaders from a healthcare system — including President, EVP, VP, and directors — for three days to capture a minute-by-minute, behind-the-scenes look at how they spent their time in order to determine how to increase efficiencies. It quickly became evident that the findings from this study would not be specific to healthcare executives but were common to executives from practically all industries.

The fundamental core of the work throughout the day for the executives was interaction with other people. Whether those interactions were via emails, meetings, reading reports, conference and video calls, fielding phone calls and voicemails, or casual interactions in the halls, 100% of the executives’ time was spent in one kind of conversation or another, the majority being unplanned.

Insigniam discovered that there were quite a few internal practices in managing these interactions that could be instilled to help executives reclaim some hours in the day, including inefficient meeting management and a lack of email and activity protocol.

Insigniam concluded that implementation of a few additional effective, efficient practices would free up more time for the leaders. These practices included:

On average, each of the leaders that Insigniam shadowed worked 10 hours per day. Their average daily start time was 7:30 a.m. and the average daily end time was 5:30 p.m. In addition, 46% of leaders devoted between 30 and 90 minutes to daily travel.

More than half of the executives’ interactions were unplanned or interruptions, and 63% of them involved face-to-face contact or an in-person meeting. Multitasking was only observed in 5% of interactions, and 91% of those multitasking activities were reading or responding to emails.

26% percent of the interactions were short, between one and four minutes. However, longer interactions between 30 and 44 minutes and 60 and 90 minutes accounted for 10% and 12%, respectively.

The total time for all the participants in the meetings observed over the 45 day period — including all planned or unplanned interactions involving three or more people — occupied 1,339 hours of total employee time, which is the equivalent to 140 10-hour workdays.

In terms of delegation, 95% of observed interactions were required to be done by the person who was being shadowed. Ninety percent of requests were also required to be brought to that person. When asked why the request or interaction could not be delegated, 48% of executives responded that they thought it would be more efficient if they did it themselves.

Through shadowing these executives, Insigniam was able to determine a number of recommendations that created opportunities for increased efficiencies in the workplace, allowing executives the chance to free up time from less critical activities and focus their efforts on ways to innovate, improve business practices, and work on developing new leaders.

Meetings occupied 1,339 hours of total employee time over the 45-day period executives were observed. In 66% of meetings attended, the leaders did not lead the meeting. In many instances, leaders were at meetings as non-interactive participants, in attendance to be aware of information rather than offer insight.

Implementing meeting management practices would have a material impact on freeing up time. A “no meeting time zone” was suggested for director-level employees and above so that leaders could have dedicated time for focus on innovation, talent development, and more. Other practices include basic, yet often overlooked, principles for meeting management:

The mass of emails to read and respond to was also occupying large amounts of time. System-wide email protocol is another lever for freeing up time.

Possible practice: Setting expectations in the email by using terms such as Request, Inform, Urgent, Delivery, Response, Share, Offer, or Action in the subject line of each email. In the first line of the email include dates for delivery of response for the email, or include if no response is required.

Many of the leaders we shadowed did not schedule time to complete tasks that were asked of them. They very often relied on their memory for meeting content and to follow up on requests.

Possible practices: scheduling “do not disturb” meeting time in the calendar for work that has to get done such as planning and prep time, travel time, and other action items.

Possible practice: Implementing daily or weekly office hours would allow for leaders to maintain this open door atmosphere while honoring their calendars and other accountabilities.

Forty-eight percent of interactions that could be delegated were not. Using the justification that “I can do it faster,” most leaders thought it to be more efficient to complete it themselves, rather than turn it over to someone else.

Within each department shadowed, there were several rising leaders. Creating structures and practices for these leaders to take on secondary tasks would create more time and openings for those we shadowed to focus on primary accountabilities.

That’s where change starts. For executives in all industries, time is literally money. With a few adjustments to how those leaders use their time — like implementing standard, system-wide protocols and delegating tasks that can be done by others — they can spend that capital more wisely, reinvesting it in creating innovation and value for customers. 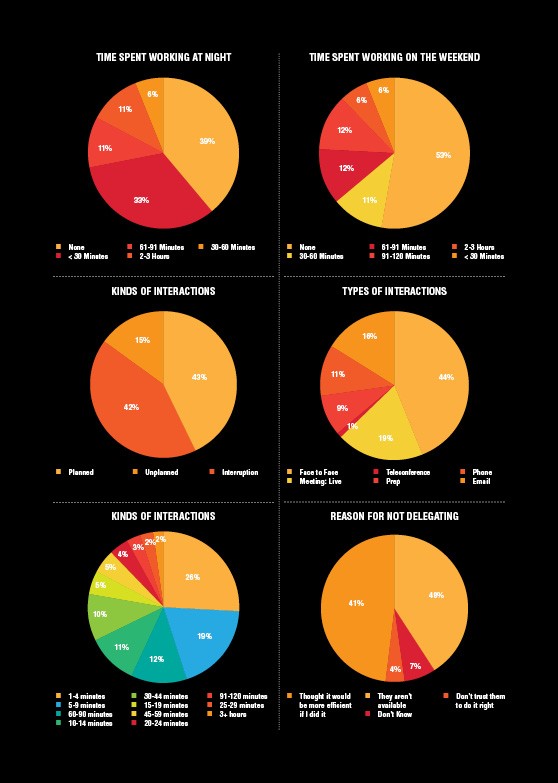