Forward-thinking leaders across a wide swath of industries have long leveraged their positions, knowledge and networks to drive social change. Bill and Melinda Gates, for example, launched their foundation to attack problems in global health care, development and education. And in 2016, Reed Hastings, CEO and founder of Netflix, created a $100 million education fund that has already provided money to the United Negro College Fund and the Hispanic Foundation of Silicon Valley.

Yet, there is a growing sentiment that businesses must do more.

One powerful voice in this cri du coeur is Pope Francis, who has called upon the “noble vocation” of business to serve as a catalyst for driving broader prosperity. “It is increasingly intolerable that financial markets are shaping the destiny of peoples rather than serving their needs,” he said in a 2014 speech. “Or that the few derive immense wealth from financial speculation while the many are deeply burdened by the consequences.”

The pope said that business can do more in three critical areas:

The pope’s message of the moral imperative of modern leadership, served as inspiration for the Fortune and Time Global Forum held in December in Rome and Vatican City. Attendees included many of the world’s most influential business, nongovernment, media and civic leaders, including Virgin’s Sir Richard Branson, IBM’s Ginni Rometty, Siemens’ Joe Kaeser and Lenovo’s Yang Yuanqing. The objective was to identify concrete, near-term initiatives the private sector could commit to and execute to serve the well-being of humankind and promote economic growth, spreading its benefits more broadly.

“Business has done more than any social program to elevate people out of poverty, but that is rarely acknowledged and is something worth noting. From the largest view you can take, business is by people and for people.”

Due in part to Insigniam’s commitment to achieving breakthroughs and inciting new thinking, several representatives from the company were invited to participate in the event.

“The forum was an atypical opportunity for executives from some of the best companies in the world, as well as religious and government leaders, to come together and look at how business can make more of a contribution,” says Nathan Owen Rosenberg Sr., a founding partner of Insigniam. “Business has done more than any social program to elevate people out of poverty, but that is rarely acknowledged and is something worth noting. From the widest view you can take, business is by people and for people. As Cardinal Peter Turkson told us, ‘The human person needs to be the center of business.’ Its impact on the world is huge, and it can be for the good or for the not-so-good. This gathering was a chance for business leaders to look at how we could do something very good.” 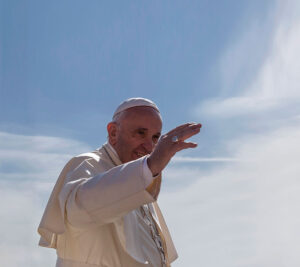 Forum attendees spent much of their time in working groups where they sought to develop solutions to major world problems. Out of those discussions came The 21st Century Challenge: Forging a New Social Compact, an in-depth report presented to the pope that outlined more than 20 specific commitments companies can use to jump-start transformation, including:

Scott Beckett, a partner at Insigniam, reports true engagement among participants in the working groups centered on financial and educational inclusion.

“What I saw in that room are people who are interested in how we can take commerce, business and free markets and create more and more opportunities for people to thrive,” he says. “There was no single person leading that conversation. It was an opportunity for everyone who wanted to be in it.”

One key point of discussion among all participants: the pressure on executives—CEOs in particular—to prioritize immediate returns on performance over the good of people. “The commitment to work against ‘short-termism’ was one of the most important things that came out of it,” says Mr. Rosenberg, whose working groups focused on job creation. “What I said in my working group is that it takes a CEO willing to go to his or her board and shareholders and say, ‘We’re going to run the company for the long-term benefit of our customers, shareholders, employees and communities. If that’s not the kind of company you want to be part of, then you should probably put your money somewhere else.’ I am not naïve and know there is a risk to saying that, but it is one of the answers, being honest about the purposes of the company, which includes more than simply a fair return to the shareholders.”

The commitments made during the forum are designed to be only the start of a conversation. Instead of leaving attendees with a singular next step, participants were encouraged to forge their own path for progress.

Pope Francis ended the sessions with a rousing call to action: “I encourage you to continue the work you have begun at this forum, and to seek even more creative ways to transform our institutions and economic structures so that they may be able to respond to the needs of our day and be in service of the human person, especially those marginalized and discarded.”

“People shouldn’t feel alone in their own willingness to impact things.”

While forum attendees all have different company stakeholders, concerns and commitments, Mr. Beckett believes “if you can point them toward a unified goal, they will all find their own ways to create and inspire change in the conversations they lead, the speeches they give, the policies they create and the business decisions they make.”

The forum was also intended to inspire business leaders not in attendance to take similar actions. Insigniam partner Katerin Le Folcalvez, for one, is working to make the conversation bigger by sharing the commitments made during the forum with clients and colleagues. “People shouldn’t feel alone in their own willingness to impact things,” she says. “Business leaders have to acknowledge, and be responsible for, the power they actually have. If they are committed to impacting an area of society, they can do it.”

And Ms. Le Folcalvez says she challenges fellow attendees who have seats in the boardroom to spread the gospel as well. “It has to come to the agenda of people who actually make the decision of where investment goes.”

Business leaders must be willing to share the commitments from the event and continue to follow up and follow through. “Otherwise it’s just going to have been a nice thing and not really make a difference. And I think that would be a missed opportunity,” Mr. Rosenberg says. He says he would also like to see more workshops to create a sense of community around this new social compact. “It’s important for people to work together on this.”