By natalie.rahnApril 26, 2017March 4th, 2022No Comments
By Insigniam minute read

Shoe Dog: A Memoir by the Creator of Nike by Phil Knight. Scribner, 2016.

Memoirs by corporate founders and CEOs have become a dime a dozen, with a new “formula for success” seemingly released every day. Phil Knight’s memoir is different. He is not concerned with showing off; he holds nothing back and hides no flaws. Instead, as Bill Gates noted in his review of the book, it is a refreshingly honest account of what it is like to start a business. Shoe Dog follows Mr. Knight from a $50 loan that started him off, through numerous setbacks and failures—both personal and professional—to the eventual rise of the more than $30 billion powerhouse Nike is today. 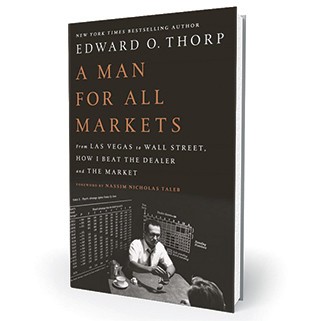 A Man for All Markets: From Las Vegas to Wall Street, How I Beat the Dealer and the Market
by Edward O. Thorp. Random House, 2017.

“The dealer always wins.” Edward Thorp put the lie to that blackjack players’ adage. The legendary mathematician dared to challenge the conventional wisdom and ended up pioneering the concept of card counting. A Man for All Markets reveals the process that led him to the game-changing innovation—and then on to the financial markets. After all, Mr. Thorp once said, Wall Street is nothing but “the biggest casino in the world.” Gamblers, mathematicians and finance buffs alike will love how this book pulls back the curtain on a brilliant mind. 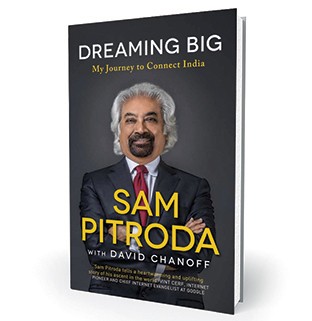 Claiming to have connected an entire country would normally smack of hubris, but Sam Pitroda is a special case. The entrepreneur, inventor and philanthropist is widely recognized as having laid the foundation for India’s telecommunications and technology revolution back in the 1980s.

Playing such a momentous and modernizing role was not easy. After earning his education in the United States, Mr. Pitroda returned to India to rise to the top of the telecom industry, advise prime ministers and earn patents. He also hit roadblock after roadblock: a heart attack and false corruption charges, to name two. Dreaming Big takes us through all the ups and downs, offering a window into how India has transformed itself so dramatically in barely more than a generation.

This Is Your Life: Broader Horizons

CEOs, just like every other worker, need time to unplug. Click To Tweet Taking a break from the work can not only boost your motivation, but also expose you to moments of inspiration and new perspectives that will make you a better leader.

If you are traveling to Africa, Europe or the eastern United States for business anytime soon and need a quick escape, consider making a stop at one of the world’s most talked-about new museums. 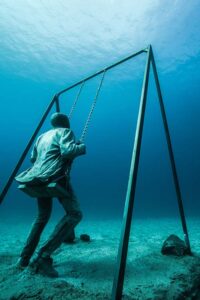 Off the coast of Lanzarote, Spain (in the Canary Islands west of Morocco)

This underwater museum was inaugurated in January, roughly 45 feet below the surface of the Atlantic Ocean. Designed by Jason deCaires Taylor, it comprises more than 300 eerie, humanlike sculptures and their surroundings, including a seesaw designed to look like an oil pump.

But what makes the museum truly unusual is how it aims to interact with the environment. The sculptures are made of pH-neutral cement and are void of any corrosive materials. As such, they are designed to attract marine life and transform over time as algae and other sea life make them their homes. In other words, this museum could end up being an artificial reef. To visit Museo Atlántico, you will need a diving certification. 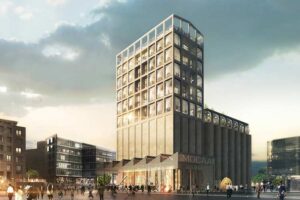 The Zeitz Museum of Contemporary Art Africa, opening in September, will be the first major museum on the continent dedicated to contemporary art—and the biggest museum to open in Africa for more than a century. It was co-founded by former Puma CEO Jochen Zeitz, whose personal collection of art from Africa and its diaspora will populate the museum’s initial exhibitions.

Construction of the Zeitz MOCAA began back in 2013 on a plum site: the Victoria & Alfred Waterfront in the heart of Cape Town. Surrounded by shops and restaurants (and ocean views), the new museum will be housed in the historic Grain Silo building, an icon of the Cape Town skyline. 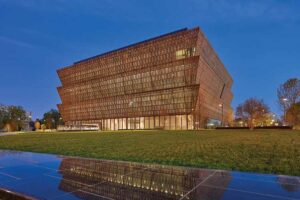 The Smithsonian National Museum of African American History and Culture

The popularity of this museum since it opened last fall has made obtaining tickets difficult, but it is worth trying. Almost 37,000 historical and cultural artifacts reside within this Smithsonian museum’s walls. Together they tell an expansive, detailed and moving history of the African-American experience since the 17th century.

Artifacts on display cover the full range of that experience, from gymnast Gabby Douglas’ grips from the uneven bars she competed on during the 2012 Olympic games, to Emmett Till’s casket, to a preserved slave cabin. And the museum is alive: Some exhibits will be updated as current events unfold.