The future of financial services is playing out in a rather mundane act carried out by millions of people around the world every day: ordering fast food.

A small but forward-thinking shift occurred last year after Singapore-based DBS Bank unveiled an app allowing customers to submit and pay for an order at their local fast food joint. When the food is ready, users head straight to the counter to pick it up. No lines, no waiting. This type of service is not especially novel. Starbucks, for example, offers a similar app-based service for its customers. But it is the first for a bank and represents where the industry is headed, says Piyush Gupta, CEO of DBS Bank.

“I keep coming back to this general idea that banking as a separate activity could disappear and get embedded in the things people do,” Mr. Gupta says. “Why are libraries not as popular? Because people did not want the libraries, people just wanted the information. If Google can give you the information a hundred times a day, then you don’t need the library. Similarly for CDs. CDs are a means to listen to music, but if we can get it on Spotify or iTunes, why do you need a CD?”

Such disruption seems unlikely in an industry so essential to everyday life. Yet there are powerful harbingers that a day of reckoning is on the horizon for financial services Click To Tweet.

Part of the existential threat traditional banks face involves a booming private fintech industry that in the first quarter of 2016 saw $5.7 billion in funding poured into different efforts. Despite that massive cash influx, Mr. Gupta foresees the biggest source of competition for DBS coming from outside the industry.

“It’s the companies like the Alibabas or the Facebooks—that have hundreds of millions of customers on a platform—that would find it easier to introduce the digital set of financial services and products to their existing customer bases,” he says. “Take Apple, with Apple Pay. Its ability to get global traction will be much larger principally because it has the customer profile and customer base.”

Unsurprisingly, disruptive paths are also being paved by the notoriously disruptive millennials. More than 30 percent of them predict they will not use banks in the future, according to a three-year survey released in 2014 by Scratch, a unit of Viacom. Indeed, nearly three-quarters of millennials said they would be more excited about a new offering in financial services from Google, Amazon, Apple, PayPal or Square than from their own nationwide bank, according to the survey.

To battle this potential disruption, Mr. Gupta knows DBS must change. Since he signed on as CEO in 2009, the company has been in full-on transformation mode backed by three core pillars:

It is a transformation Mr. Gupta sees as too big to fail. “You have to have the consummate belief that if you don’t do something, you’re going to die.” 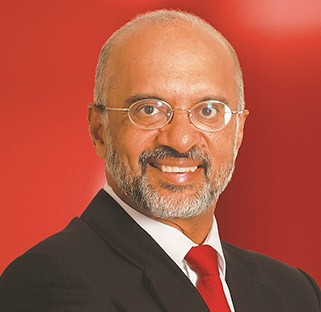 DBS’ current mission is to make banking joyful. At the heart of the seemingly Disney-esque goal is a stat Mr. Gupta often references: Nearly three-fourths of millennials would rather go to the dentist than listen to what banks are saying. “That’s a terrible place to start,” he says. “But if we can figure out a way to make banking joyful and DBS a joy to be with, then we can competitively position ourselves in a very different way from anybody else.”

Living up to that mission means changing the DBS culture into one that makes every decision based on what is best for the customer. “When people compare us to the startups or even the Googles or Apples, it really boils down to, ‘You’re conservative, you’re fuddy-duddies, you’re old-fashioned and you’re inward-looking.’ So how do you change the culture to be more like Google and Facebook?”

DBS started by implementing a process-improvement agenda, its own version of the five-day GE Work-Out framework through which groups gather to discuss specific process improvements. In doing so, DBS landed on the notion of customer journeys. By mapping customer needs, desires and context, DBS would create a better experience. Mr. Gupta says the approach “galvanized” the company.

“Our people found a very easy rubric for [when to innovate and suggest change]. It was simple: If it made sense for the customer, it’s probably okay to try and do it,” he says.

Today, DBS has an executive director who heads all customer journey design and development. All managing directors who report to the C-suite have taken on an innovation target and are required to either map a customer journey themselves or take their team through one. 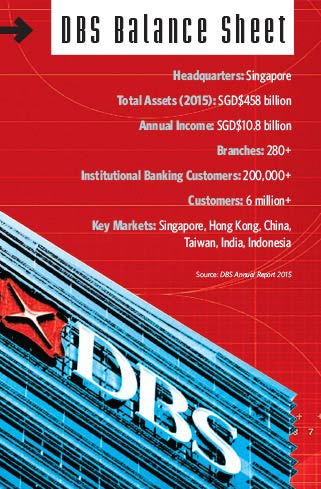 Mr. Gupta also challenged his talent development team to engage the rest of the company in thinking through the role digital can play in improving the customer journey. From there, the talent development team landed on the idea of hackathons as a sandbox for experimentation. The hackathon typically kicks off with a workshop that reiterates the importance of the digital mindset. Participating employees are partnered with startups to develop apps focused on customer engagement. “Then we basically threw them into a warehouse for a week with pool tables and beer and rave music. They worked 72 hours around the clock with the intent of coming up with an app.” The expectation was not necessarily to add any of the apps into the bank’s product rotation, Mr. Gupta says, but instead to free employee minds. “The hackathon energized a lot of people into believing, ‘Hey this can be done. I know how to do this.’”

Becoming a customer-centric organization required radical changes to the role of digital within DBS. The company’s leadership realized it needed to embrace the fact that digital has knocked down barriers to entry in markets where it competes with more established institutions. So earlier this year, the bank expanded in India to include retail banking. Instead of relying on physical branches, DBS is using a mobile-based digibank that caters to customers with 24/7 assistance and the ability to open an account without any paperwork.

If DBS can make this branchless banking work in India, Mr. Gupta envisions the company expanding the concept into other large markets, including Indonesia and China.

“In the past, you would have to build out a large brick-and-mortar network if you wanted to go to these countries. And the truth is you’d be competing with banks that have 10,000 or 15,000 branches,” Mr. Gupta says. “To build that kind of retail distribution network takes a payback of 20 to 25 years. In today’s economic environment, nobody has those pockets, and no investor has the appetite to give you the leeway to do that.”

DBS is starting to show signs of breaking away from the traditional financial services pack, scoring multiple banking innovation awards in 2015 and gaining on the competition. “For a long time, DBS was stagnating, and most of the first decade of the century we gave up market share in most of our key lines of business,” Mr. Gupta says. “In the last few years, especially in our core markets—Singapore and Hong Kong—we started to gain market share in most business-to-consumer and other areas.”

More encouraging to Mr. Gupta and other executives is that DBS employees are adopting the transformation agenda. “We embarked on a very different approach, which was to really capitalize change across the entire company,” he says. “And today I feel quite good about the fact that we’re really seeing a hundred flowers bloom in the company. Individuals are stepping up.”

Despite these wins, Mr. Gupta is quick to point out that DBS is still learning. “We’re embracing the challenge, but that’s by no means to suggest that we have won the game. … To me, the bulk of the disruption is ahead of us.”

IQ: How do you stay on top of your game as a leader?

Piyush Gupta: I read a lot and listen a lot. I think reading is an underrated activity. I read about what’s happening around the world, and I talk to a lot of people, including other bank CEOs and people in other industries, just to keep learning what’s happening. I also talk to a lot of the young people at DBS through an anonymous email process. People can write to me about what they think is wrong and what they think we should be doing.

IQ: What keeps you up at night?

PG: A lot of investors are beginning to question whether financial services is an appropriate sector to invest in. On top of that, you have the Alibabas of the world eating your lunch. If you do not get this transformation right, you will neither get investor capital nor frankly be able to have any kind of good strategy. That’s the single biggest challenge we have.

IQ: What advice do you have for CEOs when it comes to disruption?

PG: We had a conference a year ago, and one of the younger people who runs a B2B platform in China said the word should not be “disruption,” it should be “transformation.” His point was that disruption assumes that some of the young startups are going to come and eliminate you, but really there’s nothing that a young startup can do that you can’t do. You have more resources, you have access to the same technology. Nothing is different. But your capacity to transform is massive if you’re willing to take on the challenge. So You Say You Want A Transformation? Here’s Why They Usually Fail