More than three dozen people who worked for him or attended his leadership courses have since gone on to become CEOs themselves. Over a 40-year career, the Chicago native became a giant in the food industry, building leadership experience at General Mills and Kraft before becoming president of Nabisco and then CEO of Campbell Soup Co. At Campbell’s, Mr. Conant’s years of honing his leadership approach culminated in a remarkable employee-centered turnaround that began in 2001. 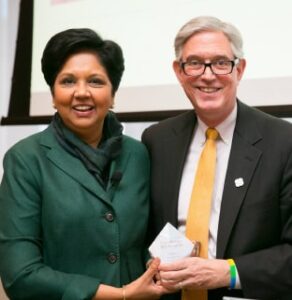 In 2011, the same year Mr. Conant retired from Campbell’s, he launched ConantLeadership, which champions “leadership that works” in the 21st century. In 2013, he became chairman of the board at Avon Products and went on to guide that company through a tumultuous period. Today, Mr. Conant, in addition to leading ConantLeadership, is chairman of Chief Executives for Corporate Purpose, a CEO-led coalition that helps companies transform their “social strategy”—how they engage with key stakeholders such as employees and customers.

This March, Mr. Conant’s second book, The Blueprint: 6 Practical Steps to Lift Your Leadership to New Heights, will hit shelves. The book aims to help leaders at all levels develop a leadership foundation that will enable them to thrive and to reach their full potential in today’s business environment. In the following interview, Mr. Conant shares insights gleaned from his decades of leadership experience and discusses how the requirements for a CEO are evolving.

Insigniam Quarterly: How do you see the CEO role changing since you left Campbell’s?
Doug Conant: When I started there, you could lead by the seat of your pants because you knew how the world was working around you. You can’t get away with that anymore. You have to be more intentional.

We now live in a VUCA world: more volatile, more uncertain, more complex, more ambiguous than anybody could imagine. Click To Tweet Companies are seeing all of this disruption of the marketplace, and it is challenging them to raise the conversation up to, “What is our mission? What is our purpose?”

The only competitive advantage you have now is the ability to put the right resources in place so you can flow those resources to the right place at the right time to meet the needs of the market. The CEOs and organizations that I have seen succeed embrace this focus on having a purpose, and they’re trying to develop a more agile organization.

IQ: Given this shift, have the essential skills that a CEO must possess to succeed changed dramatically this century? Or is there more continuity than change?
DC: Both things are true. As a CEO, you realize that for every decision that you’re involved with in an hour, there are 999 other decisions being made in the enterprise that you will have no idea about. You quickly realize, “I’ve got to have the right people around me to get the work done.” That’s unchanged.

It’s no longer good enough to just focus on your core team, because your core team doesn’t touch everything either. You have to be engaged in executive development with the next layer down. Today, I believe that the single most important job for a CEO is to attract the right talent into the organization and make sure they’re being developed, engaged, leveraged and retained.

Technology is one of those areas where executives need to be more fluent. But I also think that’s where you see executives derailing. It’s usually not because they’re lousy with technology—it’s either soft stuff like hubris or bad behavior.

I would point to Satya Nadella at Microsoft and Tim Cook at Apple as brilliant strategists who are also really good at managing the soft stuff and creating a place where people want to belong. That’s the new imperative.

IQ: The #MeToo movement has drawn a sharp eye toward corporate culture, including inclusivity and diversity in leadership. What should CEOs be doing to establish the right tone and culture in their workplaces?
DC: When I started my career, CEOs felt like they were playing whack-a-mole. They were the mole, and if they lifted their head up, some special interest group was going to whack them because you can’t make everybody happy. There was this reluctance to raise your head up, and there was some societal acceptance of that. Society doesn’t accept that anymore. As part of being a purpose-driven enterprise, your higher purpose has to be built around all the stakeholders.

I was proud of what I did early in my tenure at Campbell’s, where we looked at our culture and said, “This is just not good enough.” We invited Catalyst, a nonprofit focused on building workplaces that work for women, to come in and do an assessment, and they confirmed what I suspected: We had a long way to go. We took the results from all that work, shared it with all of our employees and said: “Here’s where we’re headed. We’re creating a big focus on diversity and inclusion. We’re creating affinity groups. I’m going to stand up and be counted on this.”

It’s healthy that the #MeToo movement is here and that there are other movements calling organizations to account. As a CEO today, you have to be able to stand on the truth of what you’re doing and champion it.

IQ: You have talked before about how the workforce is changing as younger generations are coming in. How must CEOs adapt to engage and lead younger employees effectively?
DC: The younger executives I work with through ConantLeadership often make the observation that they’re going to be working for seven to 10 companies over the course of their careers. I’ve got to tell you, they don’t want to do that. They want to be in a place where they can learn and grow and prosper in an environment that’s going to help them change and get better. The prospect of going out for the next job is incredibly stressful.

Part of your higher purpose [as CEO] is saying, “We want to create an amazing value proposition for you that is going to give you the right working conditions, the right earning conditions and the right opportunity to leave a legacy.” That’s where I think CEOs need to lead from. Then they have to make sure the organization has a nuanced understanding of how that is interpreted in different geographies, generations, genders and ethnicities. 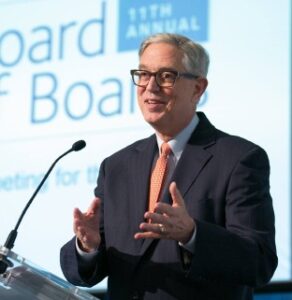 IQ: What is your reaction to Business Roundtable’s move last August to redefine the purpose of a corporation away from shareholder primacy?
DC: Chief Executives for Corporate Purpose, where I’m chairman, actually worked with some of the leadership at the Roundtable as they worked on that language. Our CEO membership, which includes 220 of the Fortune 500, has been working this route for a decade. We’ve seen increasing traction around this focus among multiple stakeholders, making sure companies are creating not only economic value but also social value.

It’s just the beginning. These companies wouldn’t have stood up and been counted if they didn’t feel they had made enough progress to stand up and be counted. They need to do more and they need to do it better, but they’re in the game. That’s where they need to be.

IQ: How can the “blueprint” for leadership that you lay out in your new book help executives enhance their leadership for a more quickly changing world?
DC: It helps you realize that your life story is your leadership story. Everything that you’ve experienced in your life is showing you how to be the leader you’re meant to be. This book is all about harvesting all the learning that you’ve had from leaders who have influenced you—the good, the bad and the ugly—and internalizing that and then shaping your leadership agenda.

The Blueprint is built around a continuous improvement process, revealing what is important to all CEOs: What are you going to do that shows people that you’re leading differently? How are you going to show up on Monday morning in a way that’s more consistent with the leader you want to be?

The people who are thriving are well-anchored in who they are as leaders. They show up with three things: greater authenticity, greater effectiveness and also greater impact in terms of performance.

IQ: How should young executives who want to become a CEO ensure they are ready for whatever comes next?
DC: Young aspiring leaders have to become more intentional about their leadership. They need to get more in touch with their own personal leadership journey and development. Keep on a path of learning and growth. It’s not about being like somebody else; it’s about being who you believe you should be.

It’s a grow-or-die world: You either grow this way or, I guarantee you, your leadership is going to wither and die. You’ve got to show up with greater authenticity and greater effectiveness because you have no choice. Be intentional about it: Champion your own development, learn and grow, and make it a priority.

This article appeared in the Spring 2020 issue of IQ Insigniam Quarterly, with the headline “CEO Leadership for the Future.” To begin receiving IQ, go here.