How to Build Surgical Robots

Noted French laureate Antoine de Saint-Exupéry was a seminal renaissance man: poet, aristocrat, journalist, pioneering aviator, and beloved author of The Little Prince—one of the best-selling and most translated books ever published.

Yet, for all this acclaim, few would ever associate Saint-Exupéry with surgical robots. Surprisingly then, his words serve as an endless source of inspiration for Megan Rosengarten, president of surgical robotics at Medtronic, a global medical technology leader with a $180B USD market cap in a field that didn’t exist 77 years ago when Saint-Exupéry disappeared while on a reconnaissance flight over the Mediterranean. 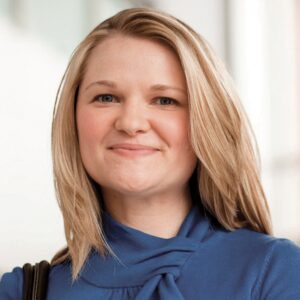 “I’m filled with pride every time someone on my team feels like they accomplished something they didn’t think was possible.” —Megan Rosengarten, President, Surgical Robotics, Medtronic

“If you want to build a ship, don’t drum up people to collect wood and don’t assign them tasks and work, but rather, teach them to long for the endless immensity of the sea,” proclaimed Saint-Exupéry.

Although stirring, it’s this very quote that keeps Ms. Rosengarten up at night. “I consider this often,” she says. “How do you inspire amazingly talented people toward a common goal—and generate enthusiasm for uncharted possibilities—while simultaneously creating an environment that affords them the freedom to determine the best tactics to achieve success?”

For Ms. Rosengarten, the answer also comes in the form of a question—one she poses to her team before launching any large-scale strategic initiative: In order to achieve our intended goal, what has to be true?

“It’s a simple question that doesn’t require people to give up or challenge their current thinking,” she says. “Instead, my goal is to shift focus toward identifying what is possible. Click To Tweet For instance, what is the end result or desired state we’re hoping to achieve? By approaching strategic conversations from this perspective, people can hold onto their current beliefs while moving toward a state of imagination.”

Imagination and inventiveness were exactly what Medtronic needed most when Ms. Rosengarten was tapped to lead the company’s surgical robotics division as president. At the time, two distinct market forces were at play: industry analysts were projecting good things for the soft-tissue surgical robotics market—worth roughly $5B USD today, it’s projected to triple by 2030. And, competitively speaking, there was blood in the water.

Surgical robots account for just 3% of surgeries worldwide, yet they can offer greater precision, faster recovery and reduced pain for patients. However, since its debut in 1999, the field had been cornered by just one product: the da Vinci robot from U.S.–based Intuitive Surgical. New competitors quickly began clamoring for ways to capture part of a market that had been dominated by a single player for two decades.

The market opportunity was not lost on Medtronic either, which, as a global leader in surgery for nearly 60 years and a pioneer of minimally invasive surgery technology and training, began developing a surgical robot around 2012. In 2019 the company previewed its new flagship soft-tissue surgical robot during a corporate earnings call: the HugoTM Robotic-Assisted Surgery (RAS) system, a modular, multi-quadrant platform designed for a broad range of surgical procedures.

But, perhaps most importantly, it was Hugo’s “future proof ” design and modularity that positioned it as an innovative gamechanger. “Traditionally, there have been physical barriers, as well as cost constraints, with surgical robots,” says Ms. Rosengarten.

“Robotic-assisted surgery should be an option for every patient, no matter where they live. By combining a modular system with components that can be used in robotics and traditional laparoscopic procedures, an ergonomic open console, an upgradeable platform that can evolve as technology advances, and Medtronic’s expertise in surgical instrumentation, we believe Hugo will provide flexibility that allows more hospitals and surgeons to leverage robotics.”

In 2008, Ms. Rosengarten—a Duke alum with several years of experience as a product director in Johnson & Johnson’s consumer products division—joined Covidien, an Irish-American maker of healthcare products, to focus on driving minimally invasive surgery in the U.S. market. By 2013, she was vice president of global marketing and involved in launching an incubator project to develop a robotic-assisted surgery platform.

By the time she was leading the robotics division, Hugo had gone from an idea to a full-fledged R&D program. Internally, teams faced challenges that slowed their ability to bring the project to market.

“When you have teams, programs and projects like ours that are highly technical, it can be easy to get deep into the weeds and test different hypotheses via a scientific approach,” says Ms. Rosengarten. “In many ways this can be beneficial, but from an operational standpoint, it risks paralysis by analysis.”

In order to align multiple stakeholders in several departments, Rosengarten had to craft a strategic approach for success across the enterprise, then work to engage scientists, researchers and product engineers in developing a new way forward.

“Megan excels at demanding results without being demanding,” says June Zeringue, an Insigniam Partner who applauds Ms. Rosengarten’s human-centric leadership style. “She’s an incredible leader who can challenge people to think differently by unhooking from the past and embracing a new future.”

To catalyze potential breakthroughs and enhancements posed by Hugo, Ms. Rosengarten had to ensure teams didn’t lose sight of the goal. But it wasn’t timelines or the transformational nature of the work that was the biggest challenge. She realized teams had to release old mindsets that stifled progress in order to empower and trust themselves.

“It is easy—and human—to shut down when something goes wrong, or when there’s [great] uncertainty,” she says. “My strategic approach was to move people into a more manageable mental state by relinquishing outdated concerns and identifying key building blocks for project success. Only then could we articulate our intended future state.”

In order to accelerate her team’s progress, Ms. Rosengarten never avoided hard conversations and focused energy to communicate a shared vision across the enterprise.“I often ask my teams, what’s stopping us from doing something today? Instead of having another meeting to explore the same conversation, if we can achieve a particular result now, let’s do it.” By aligning the organization on a common track, she can balance vision and pragmatism, advising leaders to invest time to reveal limitations so you can move forward. Such advice, says June Zeringue, “captures elements needed to catalyze breakthrough results.”

Less than a month later, UC Christus in Santiago, Chile, joined Medtronic’s Partners in Possibility Program, in which hospitals can be among the first to use the system in support of the Hugo system global patient registry. Soon after, Pacifica Salud Hospital in Panama City, Panama, used Hugo for both urological and gynecological procedures.

“With the Hugo RAS system, we are entering a new era of robotic-assisted surgery, improving how we deliver high-quality health care to our patients by using a strategic approach,” says Ignacio San Francisco, M.D., urological surgeon and specialist in minimally invasive uro-oncology surgery at Red de Salud UC Christus.

Leading such a project would be enough to hang a career on, but Ms. Rosengarten is looking ahead, embracing a fondness for Saint-Exupéry’s philosophy of empowering others.

“We, as leaders, often default to taking control and directing activities when projects and initiatives face uphill challenges. But the best strategic approach I can share is to believe in your teams and make it your job to inspire, not instruct. I’m filled with pride every time someone on my team feels like they accomplished something they didn’t think was possible.”