Cummins’ Path is Defined by Purpose

Marya Rose did not aspire to work for a big industrial company. In fact, as a lawyer, career public servant and senior aide to two former Indiana governors, she saw no appeal in the profit-driven culture of a typical corporation.

But Cummins Inc. is no typical corporation.

True, with nearly 55,000 employees and more than $20 billion in sales, the manufacturer of engine and power generation products fits the mold of a Fortune 500 corporate giant with a global reach. But its mission statement says nothing about engines, sales or profitability. Rather, Cummins defines its purpose as “making people’s lives better by powering a more prosperous world.” Click To Tweet

“That’s one of the reasons I came to work here,” Ms. Rose says. She joined Cummins as a lawyer in 1997 and climbed the ranks. Today, she leads a 2,000-person department as chief administrative officer. “I was not an engineer. I was not attracted to corporate America. But I realized that this organization cares as deeply about who I am as about what I do.”

Sustaining a high-level focus on societal good—as opposed to the pursuit of profit—has been a difficult proposition in recent years in the heavy equipment industry. Click To TweetAmid growing global competition, the bankruptcy of General Motors and Chrysler and an ugly diesel emissions cheating scandal that engulfed Volkswagen and implicated half a dozen other large car manufacturers, conditions never have been more uncertain for companies that produce key vehicle components.

Cummins has not been spared the impact of market uncertainty—revenues were fairly flat from 2013 through 2016 before surging 22 percent last year. But the company has ridden out turmoil before. It has persevered, and prospered, with a purpose-led philosophy that shuns bottom-line obsession in favor of values centered on empowering individuals, supporting local communities and doing the right thing. Something must be working:

Cummins is the sole independent engine maker in North America. It also is one of only 57 companies to have appeared on the Fortune 500 every year since 1955.

As the company’s general counsel for 10 years, Ms. Rose saw firsthand how Cummins consistently put purpose ahead of profit. She recalls one lawsuit involving an employee who had been injured in an incident that was not the company’s fault. “Legally, I could have defended the case, but it wasn’t right for the person who had been injured,” she says. After listening to her argument, the company’s leadership deferred to her recommendation to settle.

“Other companies might have chosen to defend the case,” she says. “I knew then that Cummins was truly different, driven by our purpose and values.”

Its unwavering purpose has sometimes dictated a course that seemed antithetical to shareholder interest or even popular opinion. For example, as most U.S. manufacturers squared off against union organizers in the 1950s, then-CEO J. Irwin Miller told a Fortune reporter, “I wouldn’t know how to run a big company without a strong union.” 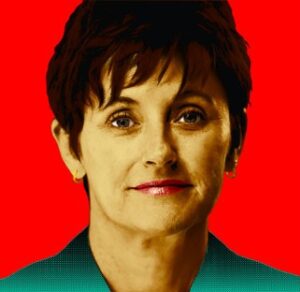 “I was not an engineer. I was not attracted to corporate America. But I realized that this organization cares as deeply about who I am as about what I do.” —Marya Rose

Cummins was one of the first U.S. companies to pull out of South Africa in the early 1980s over that government’s apartheid policies.

It also was one of the first in its industry to provide domestic partner benefits to unmarried and gay employees, a contentious issue in Indiana at the time. Recently, it was the only major Indiana company to oppose a bill in the state legislature that would deny samesex couples the right to marry. And in stark contrast to the long-running battles between engine-makers and the U.S. Environmental Protection Agency (EPA), Cummins’ relationship with the regulator has been friendly. One of the company’s former directors was William Ruckelshaus, the EPA’s founding leader.

“We have recognized for a very long time that it’s to our benefit if we’re able to produce products that have minimal impact on air quality,” Ms. Rose says.

Rather than battling government agencies over emission controls, Cummins chooses to move with the shifts in its market. The company began developing alternative-fuel products 30 years ago and today has more than 70,000 of its natural gas engines in service on buses and trolleys. Last year, it underwrote expansion of a northern Indiana wind farm that will supply enough electricity to power about 20,000 homes. The 400 diesel buses powered by Cummins engines that will begin serving Los Angeles County commuters this year will produce 90 percent fewer nitrous oxide emissions than the EPA limits.

“We are not about diesel engines; Cummins is about bringing the right power solution to our customers at the right time that delivers economic value and is the most environmentally-friendly,” Ms. Rose says. “There is not one power source for every application and because of our technological leadership and our deep understanding of our customers’ needs, we are prepared to lead regardless of the power solution, whether it is clean diesel, natural gas, hybrid, electrification or other alternative fuels.”

Upholding sound environmental standards “is far more critical to business in the long run than relaxing standards for short-term financial gain,” current CEO Tom Linebarger wrote in his 2017 letter to shareholders. “We must invest in new technologies and adopt new thinking and approaches to ensure our future success.”

“We believe that organizations need to operate for the benefit of many stakeholders—not just shareholders, but employees, customers, shareholders, suppliers and communities,” Ms. Rose says. “We’ve strived for this balance for a long time.”

But here is the thing: Doing the right thing for many stakeholders is good for business, too. Advocating for domestic-partner benefits, opposing restrictive same-sex marriage laws and advocating for a clean environment helped Cummins attract young employees—no small thing, given that the manufacturing industry in the state of Indiana faces a skilled worker shortage thanks to low employment coupled with high demand. “Creating an environment where people didn’t want to live is bad for business,” Ms. Rose says.

From Past to Present

The origin of Cummins’ purpose-led culture is a good reminder of the far-reaching impact a principled and energetic executive can have on a company and communities. It really begins with Mr. Miller, a 43-year veteran of the company who joined in 1934 and served as chairman from 1951 to 1977. He was an astute businessman—helping the company turn its first profit in 1937 after 15 years in the red—and a dedicated philanthropist and civil rights advocate.

Mr. Miller believed that corporations should support the communities around them. In 1954, he established the Cummins Foundation, one of the first corporate-funded philanthropies. Three years later, he put forth an ambitious plan to revitalize the company’s hometown of Columbus, Indiana, USA: If the city would commit to construct a new set of public buildings, the foundation would pay the architects. Sixty years later, Cummins still is giving back. Its Every Employee Every Community program gives each employee leeway to take time off from work to contribute to local projects. More than 80 percent of Cummins employees participated in the program in 2016, logging 410,000 hours of volunteer work.

But that sense of community is not limited to Indiana—or even the United States. When the company recently built three manufacturing sites in rural India, it also constructed a dam and purchased generators for local subsistence farms. Then it built homes and safe transportation routes to make employment opportunities available to young women. Today, 30 percent of the employees in those facilities are female—a marked achievement considering women made up only 26.7 percent of the total rural workforce and 28 percent of the entire country’s workforce in 2016, according to Catalyst.

Cummins’ purpose-led culture has been incubated by consistency. The company has had six CEOs in its almost 100 years, all promoted from within. That has helped nurture a core philosophy of supporting individual empowerment through the decades, another idea attributed to Mr. Miller. “He was a man of deep faith who also believed in the power of individuals,” Ms. Rose says. “He believed we needed to create an environment in which all employees can succeed.”

Respect for the individual is at the center of the company’s purpose. The idea is that every employee, from the assembly-line worker to the CEO, is a leader. It is the job of managers and executives to empower employees to make decisions that make the company better and the stakeholders stronger, Ms. Rose says.

This “personal power,” as she calls it, defines a person’s value to the organization at least as much as a job title. “There are people in our organization who have a tremendous amount of  personal power but not a lot of positional power,” she says. “Those people set the culture.”

But executives help reinforce it. They typically begin town meetings by recognizing outstanding teams and individuals whose work supports the company’s five values: integrity, diversity/inclusion, caring, excellence and teamwork. During performance reviews, managers are required to discuss with employees ways in which they uphold these values.

It all comes down to simple truth, Ms. Rose says: “To be a good leader, you have to know yourself first.”