Running to a Crisis

In times of crisis, business leaders are expected to lead with deliberate calm and bounded optimism. Yet none of them could have predicted the multiple crises and events that gave shape to 2020. That includes Tami Erwin, CEO of  Verizon Business since April 2019. Ms. Erwin runs the group of the Basking Ridge, New Jersey-based company, a global team that provides services and products for small and medium businesses and government clients, and also includes the wireline wholesale and telematics business unit Verizon Connect.

“There’s no leadership book about how to handle the crises that we experienced throughout 2020,” Ms. Erwin says, “whether COVID, racial injustice, natural disasters from hurricanes to fires, or their economic impacts.” Yet at the start of the COVID-19 pandemic, Verizon leadership rose to the biggest challenge of the year and transitioned more than 90 percent of its employees—more than 100,000 people around the world—to work from home. And it did so in just five days. “We have a line in our credo that says, ‘We run to a crisis,’” says Ms. Erwin. And as it ran toward the pandemic, “protecting our employees and keeping them safe was job No. 1.”

Creating a Culture of Empowerment

“I was formerly the chief marketing officer for Verizon,” she says. “I’ve often said that was one of the easiest jobs I ever had, because all I had to do was talk about  the brand. I didn’t actually have to deliver on the brand for the customers. It’s the front-line employees who do that.” This too reinforced for Ms. Erwin the importance of creating a culture that empowers the employees who serve customers.

“Engaging front-line employees is critical when thinking about building and sustaining a high-performing culture,” says Jen Zimmer, partner at Insigniam. “Getting employees to buy into the culture is no easy task.  You need to involve them early and show them how they will win in the new environment.” This is the culture at Verizon, she says, and it has been essential to the ability of the company to remain agile during the pandemic. “What’s happening in France is different than what’s happening in Australia,” she says. “And both of those countries have issues that are different than those we’re dealing with here in the U.S.”

Ms. Erwin has described the second quarter of 2020 as the hardest she has ever faced as a leader. “This is not an academic exercise. This is a human exercise. It’s a health care crisis that requires respect and compassion. If I don’t leave the world a better place through compassion and kindness, I have failed.” 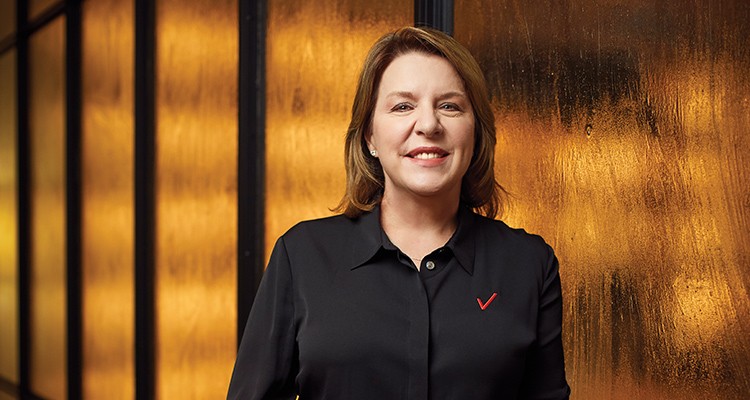 “My father was clearly the most impactful person in my life, And I think I learned compassion from my father. Compassion, kindness, respect, equality are things I learned at an early age. I gravitate to that as a core part of my belief set as a leader.” —Tami Erwin

If protecting employees was job No.1 for Verizon, job No. 2 was continuing to show up on behalf of its customers.

Culture, along with proactive action, was key. In 2019, Verizon announced a strategy dubbed Verizon 2.0. The first manifestation of the strategy was a reorganization of the company into three groups—Verizon Consumer, Verizon Business and Verizon Media—to better serve varied customer needs as Verizon expands its 5G coverage.

“I serve small businesses. I serve global enterprise customers. I serve customers in the Federal government from the Department of Defense to the White House. We have the ability to show up on behalf of each customer segment differently,” Ms. Erwin says. “We redefined our entire organization,” she says of the Verizon 2.0 initiative. “We restructured around customer segments. When you anchor that around the No. 1 priority involving your employees’ safety and well-being, then they can better serve customers. And collectively we can deliver on behalf of shareholders. And then we can help society.”

Ms. Erwin shares a companywide belief in the power of 5G, which she says will “fuel the fourth industrial revolution.” She is proud that last April Verizon became the first provider in the world to roll out the superfast 5G mobile network, dismissing as a PR stunt claims by the South Korean Ministry of Science and ITC that it had been first. The fifth-generation wireless technology features ultrafast speeds of up to 4Gbps in some areas, ultralow latency (the time it takes for a signal to make a round trip from point A to point B) and massive capacity. In short, Verizon says 5G promises to transform the way people around the world live and work.

COVID hit the Verizon Business client base especially hard. In a survey conducted by Verizon last September, 55% of small businesses expressed concerns about staying afloat financially amid social distancing regulations, and 67% of them felt the financial security of their businesses had been negatively impacted. The election worried them as well: 81% said the outcome of the contentious presidential election would affect small businesses in the U.S.

In the spirit of Verizon 2.0, the company responded with a cascade of initiatives designed to help small businesses survive. Last March, Verizon launched Pay It Forward Live, a weekly streaming entertainment series that showcases top entertainers performing at home; the series premiered with a 30-minute set by Dave Matthews. During each episode viewers were encouraged to tag local businesses with the hashtag #PayItForwardLive; Verizon in turn donated $10 in support of small businesses each time the hashtag was used. Ms. Erwin says Verizon donated nearly $5 million in small-business grants during the series’ first six months, allowing many to open a “digital front door” so they could stay in business. Sometimes all it took was being able to post a menu online.

At the same time, Verizon partnered with New York City restaurants to provide meals to first responders through the nonprofit FDNY EMS Help Fund. “We served almost 100,000 meals,” Ms. Erwin says. “And we did this by activating restaurants that would have otherwise gone out of business.

Verizon Business next launched Comeback Coach, a resource hub with a suite of digital support tools and a mentorship program that pairs small businesses with leading small-business influencers. Comeback Coach also includes access to BlueJeans, a video and collaboration tool Verizon bought in May. “All of a sudden we had a new tool in the middle of a  pandemic, where the need for a video collaboration tool was critically important,” Ms. Erwin says.

“If I don’t leave the world a better place through compassion and kindness, I have failed.”

Showing up in this way is part of the Verizon culture. “George Floyd died on May 25,” she says. “The following Monday, we committed $10 million toward racial justice. You stand up and do the right thing when you’re not in a crisis, so when you do have a crisis, you’re anchored in doing the right thing and delivering on it. Click To Tweet

Reimagining What Is Possible

“When you bring together a group of people who understand a mission, you can align and deliver on behalf of your stakeholders,” Ms. Erwin says. “And when you demonstrate that you care for the people who are delivering on the mission, you can accomplish great things together.

“At the core of this is a set of values that have always been very clear at Verizon: respect, integrity, performance, excellence and accountability. We say, ‘if you make mistakes, we’ll learn together. There are no secrets. We’ll communicate everything. We’ll create a framework. We’re not going to give you all the answers because we don’t have all the answers, quite frankly.’”

“Creating an environment in which people feel safe to make mistakes and know that they won’t be reprimanded is critical in building a culture of breakthrough performance,” says Ms. Zimmer. “Allowing people the space to fail fast and often, and to learn from those failures, can stimulate breakthrough ideas.”

Ms. Erwin is optimistic as she looks beyond the crises of 2020. “In a crisis environment, people react and respond,” she says. “Now we need to move through the recovery phase and give ourselves full permission to reimagine.”

Innovation, she believes, is essential as the world and Verizon Business transition into a post-pandemic recovery phase. “This is the piece that I get super excited about. This is where our 5G global leadership intersects with the work we’ve done around managing through this crisis. And the customer intimacy that we’ve gained over the last six months—seeing customers at their worst and seeing them at their best—when they’ve run to a crisis or when they’re in desperate need of help. We can together reimagine what’s possible.” 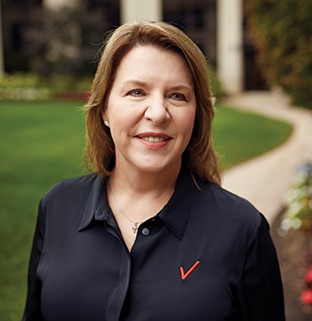 5 Ways to Lead in Times of Crisis

Empower Others to Do Good