The global cannabis industry is growing up fast. In North America and Europe, legalization measures are having a dramatic effect for both users and investors. Globally, legal cannabis could top $66.3 billion in revenue by the end of 2025. Click To Tweet In the U.S., the industry—today valued at $12 billion—is expected to grow at a compound annual rate of 24.1% by 2025, according to a 2019 report by Grand View Research.

Yet for all the gold in the proverbial hills, producers and retailers face a rocky and
uncharted path to success.

In the European Union, most nations allow or plan to allow for the medicinal use of cannabis or cannabidiol (CBD) products (nonpsychoactive compounds derived from hemp). But many are now growing more comfortable with the idea of allowing legalized recreational cannabis use as well. In August, Luxembourg announced that it would become the first European country to legalize cannabis production and consumption, going further than even the Netherlands, where recreational use is tolerated but technically illegal.

It’s a n enormous amount of money wasted due to a federal problem.”

The Dutch system is a good example of the kinds of vexing challenges businesses face. New legislation often only increases legal and financial hurdles—many of which have not been seen in any other industry. “It’s been a hassle at every step,” says John Oram, founder and CEO of NUG, a vertically integrated cannabis company based in Oakland, California, USA.

The U.S., which many predict will become the world’s largest cannabis market, is a great example. While it is illegal at the federal level, 11 states and the District of Columbia have legalized recreational marijuana, and 33 allow medicinal use. Since each state has installed its own regulatory framework, the result is a patchwork of rules often in conflict with each other and with federal law.

For example, because interstate commerce falls within federal jurisdiction, cannabis businesses cannot ship active ingredients or finished product across state lines, even if both states allow legalized recreational use. This also means that businesses cannot ship products on federal highways. Even more challenging, federally backed banks often refuse to take on accounts from cannabis businesses for fear of federal audit. 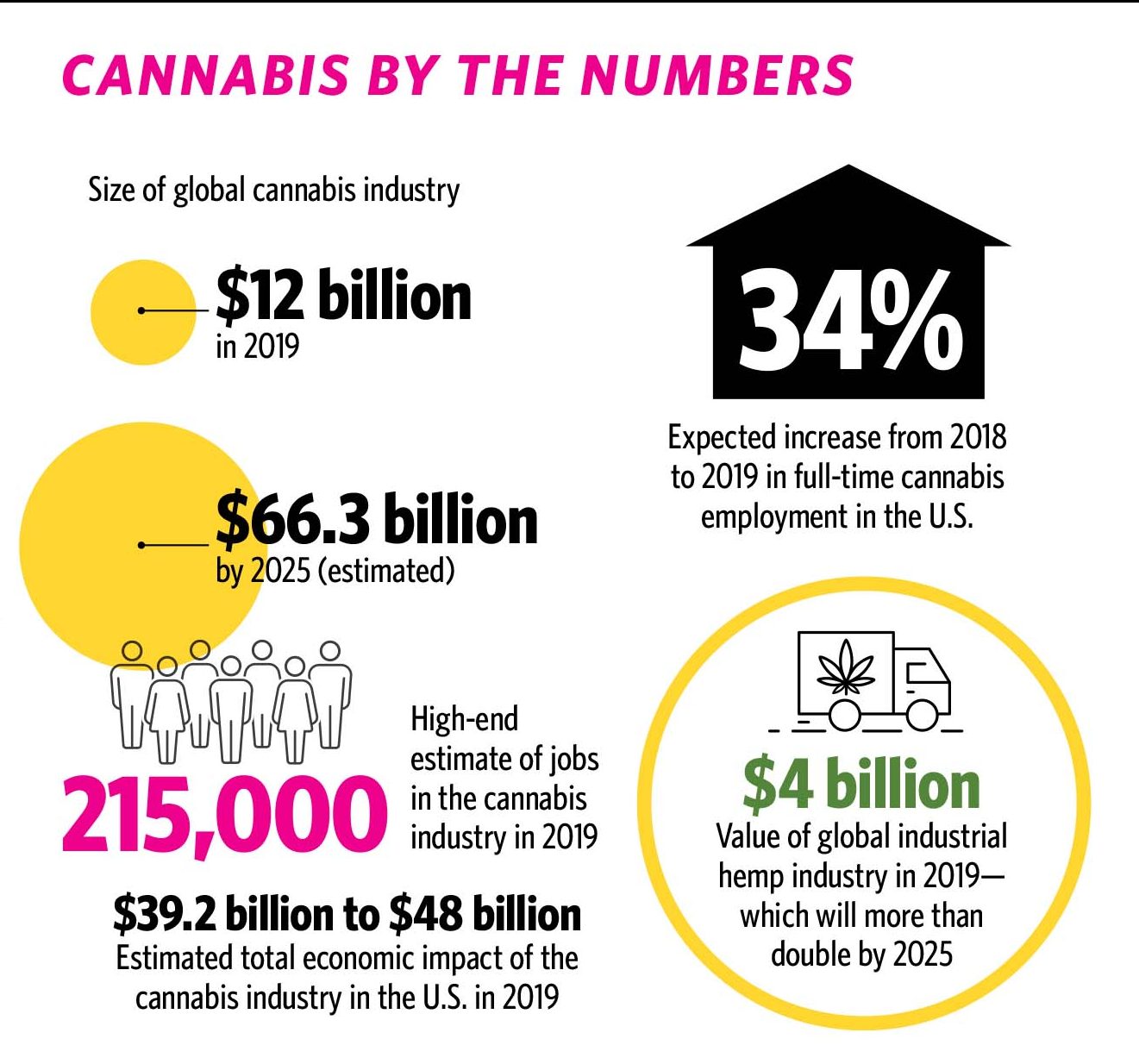 These conflicting regulations shaped NUG’s entire business model, forcing Mr. Oram to build his own supply chain from the ground up, including testing labs, growing sites, harvesting and extracting operations, packaging, wholesale and retail. He originally was interested in setting up a retail business only but quickly realized that this would be impossible. “There was no system in place. By necessity, we had to be vertically integrated.”

To grow his business in other states, Mr. Oram faces the same logistical and regulatory challenges as he did in California—he will have to build a supply chain again. “The only thing we can transport is our brand and our IP, but not the product,” he says.

While many expect the U.S. federal government to eventually legalize cannabis, until that happens every company has to start from scratch in each state, says Tom Adams, cannabis market analyst for BDS in Boulder, Colorado, USA. “It’s an enormous amount of money wasted due to a federal problem.”

Marijuana might garner lots of headlines, but hemp may ultimately have an equally profound impact on the growing cannabis industry. The two strains of cannabis were both effectively illegal in the United States for 80 years until hemp, which is nonpsychoactive, was legalized for cultivation and production in 2018.

That opened the door to various hemp-derived products—the most prominent being cannabidiol (CBD) compounds used to make health products. Sales of CBD products, touted for their medicinal benefits, will exceed $20 billion in the U.S. by 2024 from just $1.9 billion in 2018, according to BDS Analytics and Arcview Market Research. Various paper, textile and plastic products (e.g., toilet paper, cardboard) can also be efficiently derived from hemp, due to its hardiness and pest resistance.

In Europe, meanwhile, the CBD market is still budding—and looks to have a big bloom ahead. Valued at $318 million last year, the European CBD market will grow over 400% by 2023, Brightfield Group predicts. “CBD is just starting to take hold in Europe, with both product availability and consumer awareness still quite limited,” Ms. Gomez said in a statement. “This is a great opportunity for developed brands to enter and expand through Europe with far less competition than we’re seeing in the United States.”

Businesses in Canada, where marijuana became legal for recreational purposes in late 2018, face a different but equally challenging environment, says William MacLean, CEO of Wildflower Brands, which owns both a licensed Canadian retail cannabis chain and a hemp CBD wellness product company that sells goods nationally in the U.S. Canada boasts a mix of public and privately run cannabis stores, opening 100 stores within days of legalization.

Yet for all the seeming enthusiasm, some Canadian provincial governments have restricted the licensing of retail shops, limiting Wildflower’s ability to open more shops, Mr. MacLean says. In May, Health Canada passed a rule requiring new cannabis retailers to have their stores fully built before they can apply for a license—a rule nominally meant to encourage growth but that many say may only stymie it.

“The only thing we can transport is our brand and our IP, but not the product.”

The nation is cautious about the potentially hazardous impact cannabis could have on underage users as well. Canada has strict guidelines for product packaging, requiring child-resistant and tamper-evident packages with clear health warnings and plain, unappealing package designs. In addition, government enforcement officials can perform inspections on facilities with no prior notice, says James McMillan, senior vice president of strategic business development for HEXO Corp., a cannabis company based in Gatineau, Quebec. “Even pharma companies often get a 30-day notice,” he notes.

There are also rules limiting growth and scale. In Ontario, for example, licensed cannabis producers can only operate one retail shop. Yet in British Columbia, producers are prohibited from operating any retail shops at all.

Wildflower found that while investment banks are eager to invest in these companies, at the account level it is still a challenge to get a bank account. “We’ve had half a dozen accounts closed because banks get scared,” Mr. MacLean says.

He relies on his partner, Wildflower CFO Stephen Pearce, to oversee risk management strategies and define solutions when regulations conflict.

It is one of the reasons that Wildflower chose to pivot to the U.S., where the company can cultivate, manufacture and sell products on a larger scale.

Risk forecasting and a keen eye to regulation are essential in the cannabis business—regardless of location. “It is constant work to grow an operation to scale and to find capital to build enough of a supply chain to ensure delivery of product to market,” Mr. McMillan explains.

At HEXO, risk analysis responsibilities are shared throughout the C-suite. “Our core leadership team conducts ‘what if’ analyses at every opportunity to identify all possible risks, and then we take the path with the most realistic outcome,” Mr. McMillan says.

Before the 2018 Farm Bill, U.S. federal law prohibited farmers from growing industrial hemp for commercial profit, though retail sales of products made with hemp were legal. To avoid conflict, Wildflower imported hemp from Europe to the U.S. and then extracted the CBD oil in country. “There are no models to assess this newly emerging framework, so risk management is essential,” Mr. MacLean explains.

In September, the U.S. House passed the SAFE Banking Act, which would legalize relationships between the cannabis industry and financial institutions. But as more countries consider legalizing cannabis, the regulatory challenges will be here to stay.

For businesses to thrive, ambitious entrepreneurs should turn to an old playbook: Stay laser-focused on quality while working to differentiate their products and brand from their competitors. “In the beginning, quality was less important, but now it’s an expectation,” Mr. Oram says.

Revenues from legal cannabis could top $66 billion by 2025 globally, jump-starting a new economic ecosystem spanning health care to retail. As the market swells, competition will force a renewed focus on innovation and quality. And like any emerging industry, leaders must navigate a dynamic regulatory landscape covering everything from packaging to distribution.