The Ticker: The Next Wave of Wearables

By natalie.rahnApril 29, 2017March 11th, 2022No Comments
By Insigniam minute read
Once hyped as the next big thing, smartwatch technology is at a crossroads. Click To Tweet

While Apple clearly dominates the market—Canalys estimates the Apple Watch captured nearly 80 percent of global smartwatch revenue at the end of 2016—other manufacturers are struggling. Early fitness-tracker pioneer Fitbit announced employee layoffs after disappointing holiday sales, and Motorola says it has put off smartwatch development indefinitely.

But the trouble does not end with slumping sales.

“The greatest hurdle for fitness-tracker and smartwatch providers to overcome is the consumer perception that the devices do not offer a compelling enough value proposition.”

Even when consumers purchase these wearables, they are abandoning them at a high rate, according to a Gartner survey of nearly 10,000 people in Australia, the United States and the United Kingdom. Roughly 30 percent of people who try smartwatches and fitness trackers stop using them because they do not see a real use for the data they provide.

“Dropout from device usage is a serious problem for the industry,” Angela McIntyre, Gartner’s research director, said in a statement. “The greatest hurdle for fitness-tracker and smartwatch providers to overcome is the consumer perception that the devices do not offer a compelling enough value proposition.”

The market needs a heavy dose of innovation to improve product prospects. And the health care sector may be best suited to lead the charge.

According to Wearable Medical Devices: Technologies and Global Markets from BCC Research, the wearable medical device market is expected to increase from $5.5 billion in 2016 to nearly $19.5 billion in 2021.

Jawbone, an early fitness-tracker entrant, is already pulling out of the consumer wearable market altogether to focus on clinical-grade health wearables. And Nokia Technologies got into the game last year when it purchased French startup Withings, which makes smartwatches and medical monitoring devices.

This strategic shift seems to align with market demands. 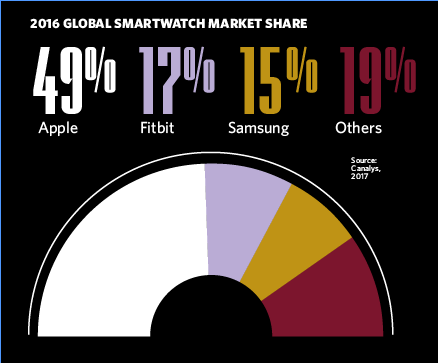 evices used in health care, with half of respondents saying they think wearables could be most useful in monitoring vulnerable people.

“It is a matter of time before medical devices collect continuously vital data from millions of patients around the world in real time and simultaneously compare them,” Roman Chernyshev, senior vice president of global technology consulting firm DataArt, told Raconteur. “These developments will change how diseases are diagnosed. Medical conditions will be predicted as a result of data and constant monitoring of health information. Technological advancements will result in health care being everywhere, although it will be almost invisible.”