2020 is the year of the crisis, marked by an unprecedented pandemic, an economic disruption and viral displays of police brutality that have sparked civil unrest and demands for racial justice. But it may also end up being a breakthrough year for women who are defining leadership during tough times. This is what some are doing that is proving successful.

While people debate wearing face masks, the need for statewide lockdowns and whether the police should be defunded, the world’s political and business leaders are scrambling to respond. Failures and successes alike are playing out, in real time, on a public stage more than ever.

It is already easy to identify some of the qualities that make leaders—and the governments and organizations they represent—more likely to emerge from these challenging times relatively unscathed. Interestingly, those qualities are found in abundance among female leaders.

COMMAND AND CONTROL VS. COLLABORATION

Tsai Ing-wen is Taiwan’s first female president. Under her direction, the nation has reported just 449 cases of COVID-19 and seven deaths as of this writing. Her handling of the pandemic included 124 well-enforced safety protocols, the earliest of which went into effect the same day that China notified the World Health Organization about the virus. Swift, decisive and transparent action to protect citizens’ health ahead of economic concerns not only curbed the disease’s deadly spread but also allowed Taiwan’s economy to grow—one of the few to do so.

In fact, if you look at the countries with the best pandemic outcomes to date, many of them have female leaders for whom transparency, empathy and compassion have guided their decision-making. Denmark, Finland, Germany, Iceland, New Zealand, Norway and Taiwan have been held up as evidence that female leaders are managing the crisis better than their male counterparts.

A former vice president with EDS, Marsha Clark is the founder of Marsha Clark & Associates and an expert on the subject of women in leadership. She is not surprised by the praise these country leaders are receiving.

“Particularly in times of crisis, the ability to empathize is extremely important. The very definition of empathy is your ability to put yourself in someone else’s shoes, and women by their very nature are better able to do this than men.” —Michelle Adams, Founder and President, Team Brainology

“The masculine model of hierarchical leadership tends toward ‘command and control,’ while women are more collaborative and relationship-oriented,” she explains, noting that every person is capable of both. “‘Command and control’ is good if I need to make a quick or unpopular decision. Collaboration is better for integrating solutions, managing perspectives and gaining commitment. The key is knowing when to use command and control and when to use collaboration. Click To Tweet Crisis leadership requires both, and women tend to be better at balancing the two.”

Michelle Adams, Ph.D., agrees. As founder and president of Team Brainology, a research firm that combines behavioral science and neuroscience with traditional market research to understand human behavior, Ms. Adams has found that men and women respond differently to advertising, newscasts and other messaging. Those differences may give an edge to women in leadership.

“Particularly in a crisis, the ability to empathize is extremely important,” she says. “The very definition of empathy is your ability to put yourself in someone else’s shoes, and women by their very nature are better able to do this than men.”

Should women in leadership thank biology or society for their unique approaches to managing projects and people? The answer might be both.

There is certainly a biological argument that claims women have an advantage when it comes to leadership qualities that are traditionally viewed as feminine, such as empathy, self-awareness, humility and transformational leadership.

In her book The Female Brain, Dr. Louann Brizendine notes that hormones and brain structure play a big role in human development, particularly in early childhood.

Dr. Brizendine, a neuropsychiatrist and founder of The Women’s Mood & Hormone Clinic at the University of California, San Francisco, wrote, “… scientists have documented an astonishing array of structural, chemical, genetic, hormonal, and functional brain differences between women and men. … They use different brain areas and circuits to solve problems, process language, [and] experience and store the same strong emotion.”

Yet, as compelling as hard-wiring is, hormones may play a bigger role in shaping how women learn, work and lead. Dr. Brizendine’s research claims, “… the female brain is so deeply affected by hormones that their influence can be said to shape a woman’s reality. They can shape a woman’s values and desires, and tell her, day to day, what’s important. Their presence is felt at every stage of life, right from birth.”

Not all studies take such a “biology is destiny” view. There is growing evidence that gender differences, including those relevant to leadership skills, reflect the brain-changing effects of external factors as much as internal ones.

Georgina Rippon, professor emeritus of cognitive neuroimaging at the Aston Brain Centre at Aston University in Birmingham, United Kingdom, has written The Gendered Brain. Her research does not support the idea of a male brain and a female brain. Her view is that every brain is different from every other brain as a result of the different experiences and attitudes that individuals have had. Gendered experiences will produce a gendered brain.

“For a long time, there was a general assumption that because men and women have different roles in society, they must have different brains. Scientists worked backward from that and have largely focused on finding and identifying those differences,” Professor Rippon says. “But the latest research shows that our brains are actually more plastic and moldable than we ever realized, and our experiences and the attitudes we encounter play a greater role in our brain development than we had previously believed.”

Professor Rippon points out that apparent behavioral differences may reflect social expectations. For example, a study may find that women are more empathetic than men. But if the participant does not know the study is looking for empathy, then her response may well be indistinguishable from a man’s.

“Women are given permission in society to be empathetic because they are expected to be more emotional, whereas men are not given that same permission,” Professor Rippon says. “So, when you look at the success of different types of leadership, particularly during a crisis when understanding how people feel is important, then the people who have been given permission to be empathetic all their lives may naturally be more successful.”

Researchers who focus on nature versus nurture have to reckon with the effects of societal conditioning on both the brain and behavior. Ms. Adams, of Team Brainology, acknowledges that gendered experiences and factors such as gender identity may play a bigger role in behavior than just biological sex.

“We are seeing a lot of gender-neutral and transgender people in our lab, and their responses seem to resemble the gender they most identify with instead of their biological sex,” she says.

This ties in with Professor Rippon’s research. People and their brains develop according to the lives they lead and the expectations, rules and structures that govern how society views them. “If you’ve lived as a transgender person, for example, your brain will reflect your undoubtedly different experiences,” she says. “It’s quite clear that experiences and attitudes change people. … Your brain will pick up on the rules of social engagement and adapt accordingly.” 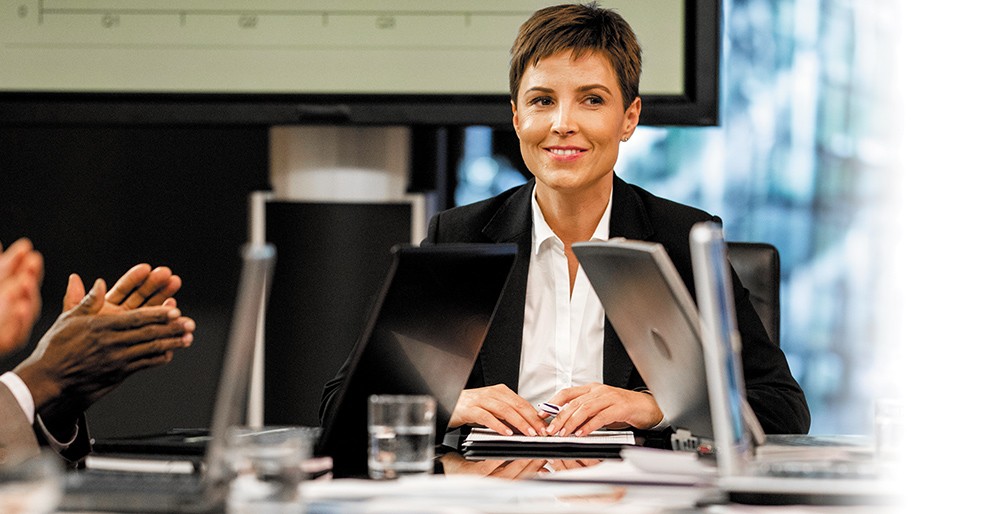 GENDER GAP IS BAD FOR BUSINESS

Whatever the driving force behind the differences between men and women in leadership, the business world should acknowledge that they exist and include more women in upper-level management.

Despite the fact that women make up nearly half of the U.S. workforce, they constitute just 5.1% percent of CEOs and 11.5% of other top executives in S&P 1500 companies, according to Pew Research Center. Although women are just as likely as men to access lower-level management positions, they are severely underrepresented in the C-suite, even though they are more likely to be college educated.

Interestingly, the very qualities that seem to distinguish women in leadership from their male counterparts—such as honesty, civility, compassion, fairness and empathy—are those that both genders want to see among political and business leaders.

“We conducted our survey ahead of the 2018 election, when there was a historic number of women running for Congress,” says Ruth Igielnik, senior researcher at Pew Research Center and coauthor of the report Women and Leadership 2018. “The majority of those who responded that gender does make a difference in leadership said that having more women in Congress would make it more respectful and transparent, and that it would do a better job solving the country’s problems. We saw a similar trend among parallel questions about business leadership.”

In addition, the S&P Global study When Women Lead, Firms Win found that having women in leadership positions leads to greater profitability, enhanced stock performance, and improved diversity and inclusion—all factors that can improve a company’s position during an economic or social crisis.

FIVE CHARACTERISTICS OF WOMEN IN LEADERSHIP

Ms. Clark, who spent several years developing corporate leaders for Electronic Data Systems (EDS) before starting her own business in 2000, is passionate about helping women reach the C-suite. “That’s because I believe a woman’s leadership style is unique,” Ms. Clark says.

That’s not to say all women possess these attributes or that men don’t have them. “Everyone can do the work of becoming more empathetic or humble,” says Ms. Adams, who spent several years at PepsiCo teaching executives how to understand their customers’ unique needs. “You can learn to adjust your management style.”

Ms. Clark agrees. “The best leaders during a crisis, regardless of gender, are those who communicate more, not less,” she says. “They acknowledge the realities and are transparent with their thoughts and feelings. They demonstrate their humanity.”