What Keeps Executives Up at Night?

Ask CEOs where they can find a competitive edge today, and many will tell you the same things: Build and leverage a unique corporate culture, and elevate the customer experience. These two objectives—which are more directly connected than many people realize—matter more in the marketplace now than ever before.

Yet many executives do not feel their organizations are making much progress developing culture Click To Tweet and the customer experience. There is a lot of consternation around the world: Two-thirds of CEOs and managing directors either believe that installing and leveraging the right corporate culture is not going well or are still in the process of trying to figure out how to do it. At the same time, half of executives say they are either not doing enough to elevate their current customer experience or are not doing well in their current efforts.

Only 22% of senior vice and vice presidents felt negatively about the progress their organization is making to elevate the customer experience, versus 50% of CEOs and managing directors. If unaddressed, this gap can create a black hole where strategic initiatives fail.

These are just two of the major themes that emerged from the latest Insigniam Executive Sentiment Survey conducted in late 2015. The annual survey asks executives from a variety of industries to rank major concerns in several key areas of operations and report how well they think their companies are performing in those areas. The survey, which taps into Insigniam’s global network of large-cap companies, also polls executives for their outlook on the key challenges they face both internally and from competitors.

The new survey results show a perception we have seen building for years becoming even more widespread: Culture is a key driver of performance. More and more, executives are realizing that culture is about much more than fun office perks. Engraining the right culture means getting people to think and act in a manner that will lead them to take actions in support of the overall organizational strategy that produce the desired results. 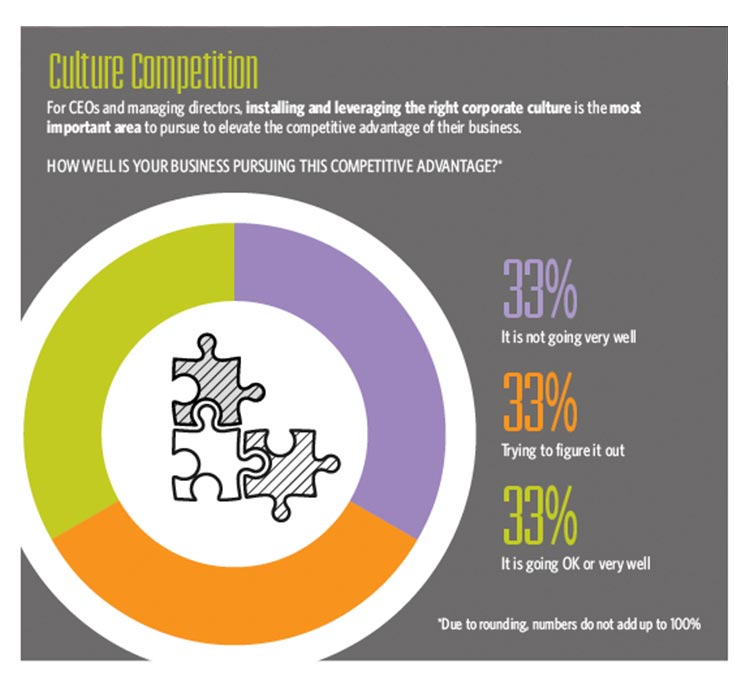 As such, culture is woven into nearly everything executives told us they were most concerned about. For instance, CEOs and managing directors said having the right people on staff and recruiting, training and retaining talent are key competitive advantages. These points all come back to a company’s culture.

Likewise when it comes to elevating the customer experience: That is also primarily done through culture. Customers are more likely to have a positive experience with companies that have engaging cultures.

Unfortunately, our survey suggests that while executives are increasingly recognizing that their organizational culture plays an integral role in the performance of their business, many are still unsure how to cultivate, implement and leverage culture. Thirty-three percent of CEOs and managing directors say installing and leveraging the right corporate culture is not going very well, according to the survey.

The customer experience today is all about interaction. It is easy to think that interaction happens only between a customer and some piece of technology. A consumer interacts with a mobile app to make a purchase, for instance. A client places an order on an encrypted website. But the technology is just the interface that companies and customers use to interact. No matter the method, the interaction is still happening between your culture and that customer.

That is why elevating the customer experience begins with developing an organization that has a shared way of thinking and acting—a shared culture. And that is also why it makes sense to us that, in our survey, almost the same percentage of CEOs and managing directors gave negative nods to their progress on culture as the percentage who felt pessimistic about their progress on elevating the customer experience. But, while CEOs may feel negatively about their progress, those tasked with managing the​ elevati​on of​ the customer experience do not seem to share that sentiment. Only 22 percent of senior vice presidents and vice presidents felt negatively about the progress their organization is making​ in this respect, versus 50 percent of CEOs and managing directors​. ​If unaddressed, this​ gap​​ can create a black hole where strategic initiatives fail. 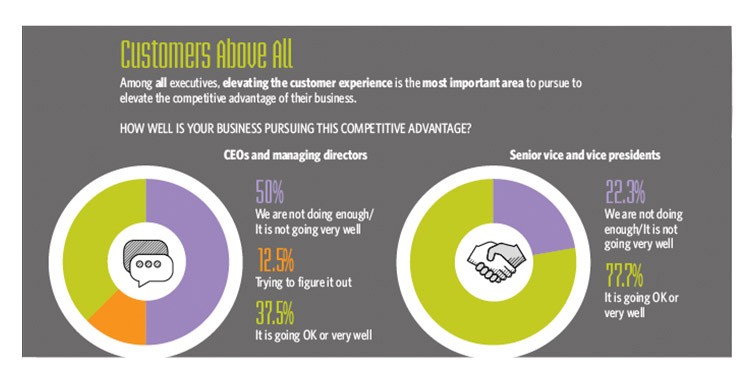 The findings seem to dovetail with the findings from a recent study by The Economist Intelligence Unit (EIU) that found few multinational firms “have created roles such as a chief customer officer to take charge of the overall customer journey; many have basic work to do on integrating content between different platforms; and less than one-third track customer behavior across channels.”

The EIU study also found that executives believe boosting the customer experience is, ultimately, an organizational issue. In other words, the right culture connects with customers in the right way.

Among all executives in our survey (taken in aggregate), the second most important thing they said they could do to create a competitive advantage was to improve their product launches. And yet one-third of CEOs and managing directors said they are not doing enough in this area at the moment.

Unquestionably, there is a payoff in proper execution of new product launches. One example: At Estée Lauder Companies, new products make up an astonishing 20 percent of annual sales every year. But to create new products for store shelves, Estée Lauder invests heavily in R&D and innovation.

Yet our survey found that most executives do not value heavy R&D investment as a method for creating competitive advantage. In fact, “Investing heavily in R&D” ranked near the bottom of the ways our respondents said they could stand apart from competitors. It seems that even as large-cap companies are pushing to deliver new products, they are relying on proven product bets rather than potential breakthroughs from internal investment in R&D.

Innovation is undoubtedly still important to executives, but in spite of the proven returns in the market for successfully implementing wide-scale innovation, executives seem unsure of how to go about it. Fifty-seven percent of all executives said that in their efforts to spread innovation through their enterprise, they were not doing well, not doing enough or still trying to figure it out. And the other 43 percent said they are only doing OK.

When we asked executives what they worry about with regard to successfully delivering on their accountabilities, many responses related to culture. They expressed concerns about having the right talent to achieve results and preparing and developing the next generation of leadership. “Talent” was the most used word in responses to the question, followed by “resources.” 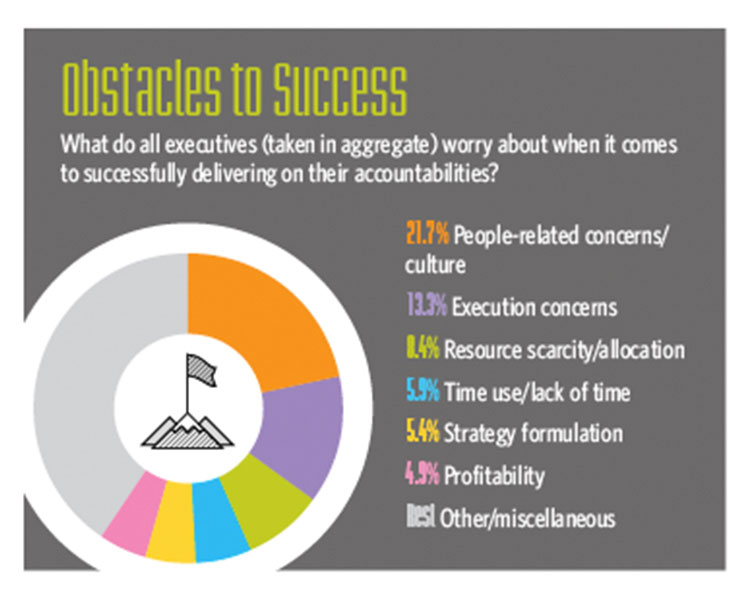 Whether respondents were CEOs, managing directors, senior vice presidents or vice presidents, their top three accountability concerns remained the same: People-related issues, execution issues and a lack of resources are things all executives worry about.

What does not seem to be worrying executives? In spite of a flurry of mergers and acquisitions activity in the global economy, only 2 percent of executives said they view M&A as a way to create a competitive advantage in their organizations. This suggests that the increase in M&A activity is more out of necessity for survival rather than a tool to create competitive advantage.

As we look back on Executive Sentiment Survey results from recent years and compare them to the latest survey, we are struck by the growing consensus on the importance of creating the right culture. We also notice how this connects to executive concerns about the need for change initiatives and organizational agility—the ability to innovate and execute quickly in reaction to a changing business environment.

In 2012, the majority of executives said operational excellence—primarily meaning the ability to get more and better products to global markets faster and more efficiently than ever—was the biggest single factor that would define the success of their companies.

The next year, 85 percent of executives told us they were worried that their organizations were not prepared to deliver on innovation. More than a third told us their culture was in need of a transformation.

In 2014, executives said they were concerned about cultural issues and execution. No surprise, perhaps, given that 97 percent of survey respondents also told us they had undergone a major change initiative in the past two years.

The ability to adequately manage change continues to be a strong theme in this year’s results. As one executive told us, “We are continuously transforming ourselves based on our values and continually adapting our organization to a changing world.” The Impact of the Omicron Variant: 4 Ways To Create Visibility